In Case You Missed It: Two-Spirit Inclusion in the Workplace

On June 24, 2020 Pride at Work Canada partnered with Indigenous Works to present a panel on Two-Spirit Inclusion in the Workplace, emceed by Pride at Work Canada’s Manager of Programs Jade Pichette. The virtual session was sponsored by Bell. Here are some of the highlights:

Two-Spirit Elder Albert McLeod opened the session with remarks. McLeod is a Status Indian with ancestry from Nisichawayasihk Cree Nation and the Metis community of Norway House in northern Manitoba. He spoke about the need to reach over systemic colonial and racist barriers to reach one’s dream, noting the long history of queer Indigienous advocacy that has contributed to the rights and freedoms many enjoy today.

Patricia Baxter and Kelly Lendsay provided remarks on behalf of Indigenous Works. Baxter, a Director on the organization’s Board and past co-president of the Canadian Women’s Foundation, pointed out that there is a lack of research in the area of Indigenous workplace inclusion that Indigenous Works is trying to address in their efforts to encourage participation from Indigenous workers. Lendsay, the organization’s CEO and president, drew parallels between Indigenous Works and Pride at Work Canada and reinforced that inclusion is a business practice that drives engagement across an employer’s workforce.

The panelists started by sharing their perspectives on the most pervasive workplace challenges faced by LGBTQ Indigneous and Two-Spirit people in Canada. John shared some arrestingly racist statements he has heard (or heard of) directed toward Indigenous people in the workplace, noting that more dialogue is required to bring consciousness of Indigenous issues to people who have little awareness. Leaman spoke of how the “2S” is often included in acronyms describing queer and trans communities, but that its meaning remains widely unknown in queer circles. Wesley used a metaphor to help attendees understand what it’s like to “dwell in the margins” of society, explaining that when you experience multiple forms of oppression it can feel as though you descend deeper and deeper into a ditch. The deeper one gets into the ditch, the harder it can be to see what’s happening above ground. She cautioned that her attitude was not defeatist, just that more challenges mean we all have more to work on. This includes allyship from people who are not Indigenous.

When asked by Castilloux Calderon about working in sectors many see as not accommodating to diversity initiatives, John made it clear that industries like oil and gas do not operate the same way they did years ago. However, he said there is much work to be done to urge companies past regulatory minimums and simply consulting with Indigenous communities. He said many environments need to be changed in order to ensure broader inclusion.

Leaman spoke specifically about making space for Indigenous people in tech, an industry where they are underrepresented. He explained that while Indigenous relations are part of the business model for industries like oil and gas, he sees fewer targeted diversity and inclusion strategies in tech environments. He made reference to a lesson he received from an elder, who said the role of Two-Spirit people before colonization was that of mediator. He said the encouragement of harmony through mediation is something that could be brought to many types of workplaces by engaging Two-Spirit talent, given the challenges explored earlier in the discussion.

“I wish for a world where we have two feet to stand on, where we can step out of the margins” – Saylesh Wesley

When asked what she thought was missing from workplaces, Wesley shifted the premise of the question in order to answer it more personally. She said she couldn’t miss what she didn’t have before, which was a feeling of significance in the workplace. Now all she can do is look forward, taking the experience she has gained to be a teacher, an auntie and an aspiring elder. Wesley also sees herself as a healer in her community, and moving forward is part of the healing process for many Indigenous communities. She talked about how she wished for a better world, but that more important than wishing is action from all of us to make the world we have more kind and loving. For (new) settlers, it could be a better opportunity to recognize the past and work for the ReconciliAction.

There was lots of love for the moderator and panelists in the chat. Everyone was grateful that they shared not only their personal perspectives, but great actionable steps for attendees to take back to their workplaces in order to make them more inclusive. 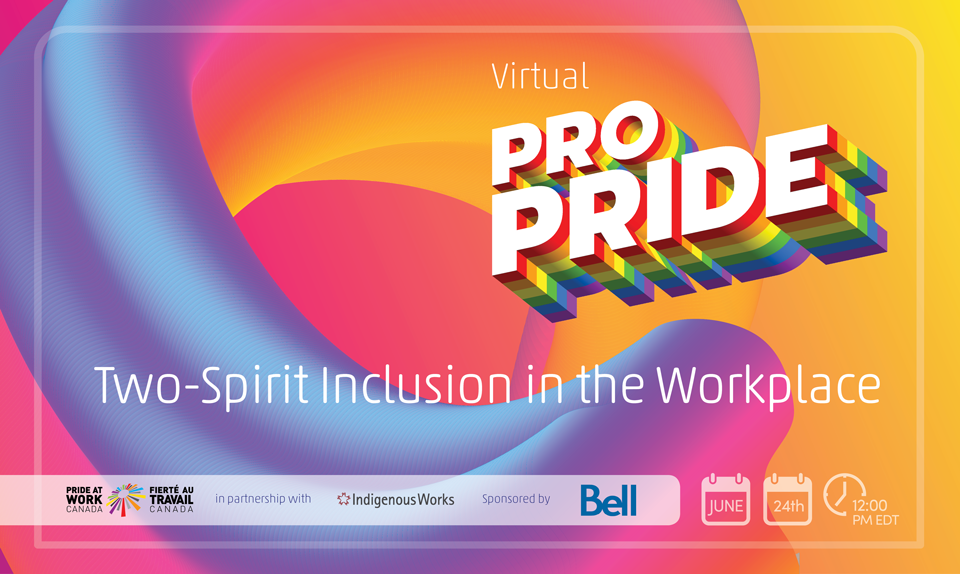 Feel bad that you missed out on the action? Never fear! Email info@prideatwork.ca for a link to a recording of the session or access our YouTube channel.