Pride at Work Canada/Fierté au travail Canada works across northern Turtle Island, on the traditional territories of the First Nations people, Métis nations, and Inuit, which includes Two-Spirit and LGBTQIA+ Indigenous people. We recognize there are multiple barriers that impact Two-Spirit and LGBTQIA+ Indigenous people from accessing meaningful, affirming and inclusive employment. In our work, we look to reduce those barriers and are open to feedback from Indigenous workers, employers and jobseekers in making this driving factor a reality.

WHY WE DO IT

2SLGBTQIA+ people in Canada face significant barriers to employment and advancement in the workplace. It is estimated that between 5-12% of the Canadian population identifies as 2SLGBTQIA+, but are over represented in our country’s homeless population (25%). Without the supportive network of their families, many 2SLGBTQIA+ youth find it difficult to get their first job. The 2020 Trans Pulse Canada Survey showed that while 89% of trans people have at least some college or university education, about half make $30,000 per year or less.

HOW WE DO IT

For 2SLGBTQIA+ people in Canada to confront today’s economic challenges they need good jobs with rising incomes. Because of stigma, stereotypes, bias and discrimination against 2SLGBTQIA+ people, empowering community members with skills is simply not enough of a strategy. Pride at Work Canada operates as a member services agency for employers, offering institutional education and guidance to organizations that make a commitment to supporting 2SLGBTQIA+ inclusion. Many employers see the economic benefit to engage in market-facing messages of support for 2SLGBTQIA+ communities, particularly during Pride season. While a welcome show of support, this alone does not create opportunity for 2SLGBTQIA+ people. In addition to supporting meaningful engagement with the public, we consistently underscore the importance of focused internal strategies to improve policies and practices that generate measurable outcomes for 2SLGBTQIA+ employees and job seekers, not just the company’s bottom line.

HOW WE KNOW IT’S WORKING

Pride at Work Canada was founded in 2008 by a group of dedicated volunteers who sought to put 2SLGBTQIA+ inclusion on the agenda of Canada’s largest employers, starting with just 12 employer members. In 2014 Pride at Work Canada, with 35 employer members, refreshed its strategy, taking a new focus on evidence-based practices in workplace diversity and providing crucial support to people who have inclusion outcomes as a deliverable of their job. Since then the organization has experienced exponential growth and now boasts over 250 employer members and over 60 community partners. Twelve years after its founding as a volunteer-run group mostly focused on Toronto and Montréal, Pride at Work Canada now employs 15 people and runs volunteer working groups with dozens of members in Calgary, Halifax, Montréal, Ottawa, St. John’s and Vancouver. We continue to learn every step of the way, celebrating the hard work of employers across Canada who work with us to build financial opportunity for 2SLGBTQIA+ people who are eager for the opportunity to prove themselves. 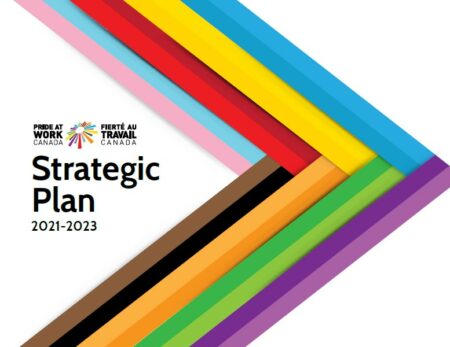 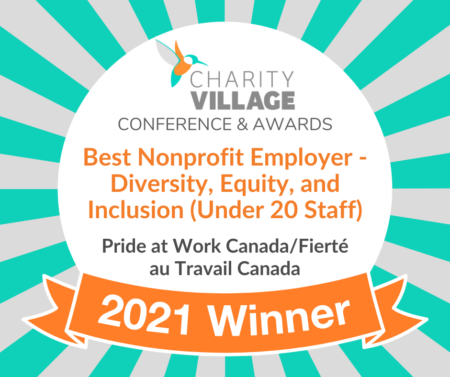 Through dialogue, education and thought leadership, we empower employers to build workplaces that celebrate all employees regardless of gender expression, gender identity, and sexual orientation.

A nation where every individual can achieve their full potential at work regardless of gender expression, gender identity, and sexual orientation.

INCLUSION
Diversity fosters success. The most successful organizations reflect and embody the values of the people they serve. Pride at Work Canada encourages organizations to support authenticity at a corporate level and create workplaces where all employees, regardless of gender expression, gender identity or sexual orientation, can be their authentic selves at work and, ultimately, be more productive.

COLLABORATION
There is strength in numbers. By working together with a diverse range of organizations and individuals, we have created a nationwide network that continues to expand and strengthen, allowing our partners to connect and learn from each other.

EMPOWERMENT
Sharing knowledge accelerates the pace of change. By providing organizations with the information they need to bring about change (the “how”) and demonstrating the benefits of a diverse workplace (the “why”), we empower their leaders to make positive decisions.

RECOGNITION
Leaders deserve to be recognized. Celebrating successes and acknowledging those who have triumphed in the face of adversity are essential in promoting diversity and demonstrating its benefits to the world. Recognizing excellence and achievement inspires others to make positive changes within the workplace.

PROFESSIONALISM
Professionalism denotes quality and respect. We are committed to adhering to the highest professional standards in our interactions with our partners.