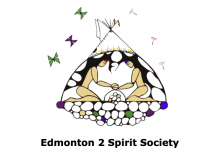 Edmonton 2 Spirit Society (E2S) is a non-profit organization based in the traditional lands of amiskwacîwâskahikan ᐊᒥᐢᑲᐧᒋᐋᐧᐢᑲᐦᐃᑲᐣ on Turtle Island, colonially known as Edmonton, Alberta, Canada. On April 5, 2018, the Edmonton 2 Spirit Society (E2S) was officially incorporated under the Alberta Societies Act as a non-profit organization and has since grown to be a federally incorporated charity under Canada's Not-for-profit Corporations Act.

According to the oral history of local Indigenous peoples, there has existed 2Spirit (2S) People in Edmonton since its foundation in 1795 and certainly long before. 2Spirit peoples have been a part of the Nehiyaw (Cree) community for generations before colonization, and it stands to reason that 2Spirit people would have the same continuity as other Indigenous people in the area. However, it wasn't until the 21st century that 2Spirit-oriented groups were founded in Edmonton .

The main focus for E2S is to:

E2S provides services and supports to all 2Spirit, IndigiQueer and/or Indigenous LGBTQIA+ community regardless of any other intersecting identity or circumstance.

To re-establish and enhance our traditional roles and responsibilities as Two-Spirit people in Indigenous communities while creating supportive environments within all societies for contemporary Two-Spirit peoples.