In Case You Missed It: Beyond Diversity Towards Dignity

On June 22, 2020 Pride at Work Canada partnered with Inclusive Workplace and Supply Council to present a panel on Beyond Diversity Towards Dignity, emceed by Pride at Work Canada’s Board Member Claire Yick (she/her). Here are some of the highlights:

Albert McLeod (he/him, she/her), the Board Director of the Two-Spirited People of Manitoba, opened the session with remarks. McLeod is a Status Indian with ancestry from Nisichawayasihk Cree Nation and the Metis community of Norway House in northern Manitoba and has thirty years of experience as a human rights activist. He spoke about employment being an inherent right of Canadians as well a determinant of health and how racism and homophobia disrupts employment for many indigenous and LGBTQ2+ people, including himself. He is optimistic about the progress society has and continues to make through the journey of decolonization and reconciliation. He also encouraged people to acknowledge the natural world we exist in and the spiritual bond we have with our ancestors. 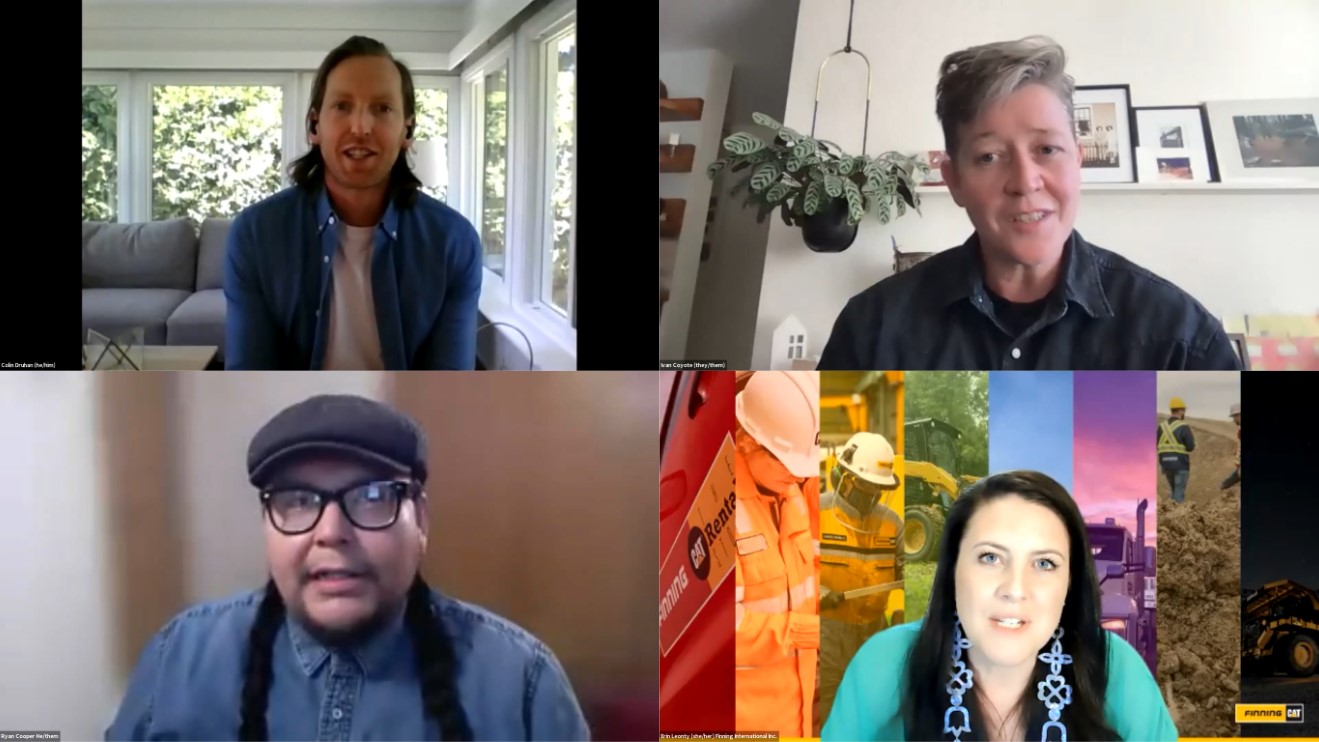 Colin Druhan (he/him), the Executive Director of Pride at Work Canada moderated the panel. He shared his first experience of dignity in the workplace when he was given the opportunity to work with people after previously being told his voice was ‘too gay’. He introduced the panel consisting of:

“Lead with love, education and understanding.”

Cooper talked about their entrepreneurial spirit and having to create their own inclusive spaces to share their stories. Having their own production company, they make sure to have a diverse team at the table and on the set. He builds dignity in the workplace by doing what came naturally to him; going to communities and asking for help, learning from his parents’ inclusive business practices, and implementing his non-hierarchal indigenous culture into his business blueprint. He makes sure everyone is included in the conversation and have their feedback heard. He also advices to practice self care, remain agile and open to implement changes forwarded by others. He honours indigenous and two-spirit leaders such as Albert McLeod and encourages people to lead workspaces with love and understanding.

“..if we can anchor in the common need for dignity and respect, just think of the power we can drive together.”

Leonty spoke about how she addresses power balance and safety at Finning International, that has thousands of employees across multiple countries. She emphasized the importance of recognizing the power to contribute to the collective good and the re-balancing of power in an organization. She worked with a roadmap to get leadership support on the importance of having a dignified workplace. Finning was then able to make change by anchoring it to safety- not just physical ones while dealing with heavy equipment, but also psychological safety. They were able to draw from their underrepresented talents to identify and prioritise gaps. The executives were then made accountable to drive change but with the lens of the community and amplifying their voices. Creating dignity doesn’t just empower the underrepresented, but the organization as a while. Leonty advices to not re-invent the wheel but to find something that works well and building on it.

“….if you provide for your employees, what you will get is an extremely loyal employee who will bring their very best self to work.”

Coyote shared personal stories about their experience working in the trades as a female-assigned trans person. They powerfully detailed working on unsafe sites where the basic human dignity of clean wash and change rooms were not afforded to them. Coyote spoke about how the burden to advocate for change always unfairly fell on themselves and how they were eventually chased out of the trade that they love. These hostile environments often chase away diverse identities that could have made progressive change. Coyote also spoke about the reciprocal nature of community, mentorship and allyship. They emphasize that community is not transactional and that one has to bring their whole selves to engage- not just their issues to be solved. They also spoke about the importance of listening to other communities and advocating for and alongside them as allies.

Albert McLeod then ended the session speaking on how we are afforded freedoms previous generations fought for and the importance of leading fight against discrimination and oppression.

Did reading this make you wish you had attended the event? Never fear! Email info@prideatwork.ca for a link to a recording of the session or access our YouTube channel.